The first stage in the multiplier is the GALI-39. It generates several strong harmonics of 576 MHz. Next stage is a tunable filter, which selects the 2. harmonic (1152 MHz) and suppress other frequencies. The two variable capacitors in the tunable filter can be seen near the center of the PCB. Last stage is a GALI-6 which amplifies the desired signal and provides +16 dBm output. 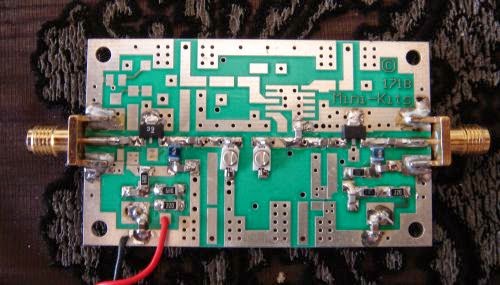 Working with SMD components is difficult in the beginning. But "practice makes perfect" and you get used to the small parts and small distances. I really like to assemble SMD projects, but you need the right tools for the job. A temperature controlled soldering iron with replacable tips; some thin soldering wire (0.5 mm diameter); and a magnifying glass are necessary tools. You will also need a wooden tooth-pic for securing the component while soldering it the first time.